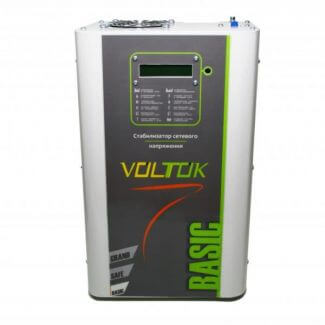 Voltok is a Ukrainian brand with production facilities in Mariupol. Until 2017, the devices were actively imported into foreign countries, but now Voltok TM will be available for the Ukrainian consumer.

Voltok Basic SRK9-15000 is an electronic thyristor stabilizer designed for power up to 15 kilowatts.

The manufacturer has updated the software of the Voltok Basic SRK9-15000 model - the device has been accelerated and the system has been fully translated into Ukrainian. The internal memory of the stabilizer captures the last 20 crashes associated with the time of the event. All notifications are displayed in Ukrainian in a way that is understandable to the user.

The device is equipped with the "Bypass" mode, in case of emergency, the stabilizer will give out a stable voltage, which it receives at the input. Voltok installs copper transformers in its stabilizers. These are durable and wear resistant elements. This machine can work when using welding equipment.

Call the official store and purchase a Voltok stabilizer made in Ukraine! This is a stabilizer with a favorable ratio of price and quality!

Please enter your phone number Your order has been accepted! Our manager will contact you shortly.